Starting a new life in the United States is never easy for refugees. But doing it during a pandemic has created even more struggles, especially after the federal government cut off resettlement funding and suspended new arrivals indefinitely. (May 13)

WASHINGTON – The Trump administration will slash the number of refugees allowed to resettle in the United States to a new low next year – permitting no more than 15,000 people fleeing war, violence and persecution across the globe to make a new home in America.

The State Department announced the cap late Wednesday and shortly after President Donald Trump attacked refugees during a campaign speech in Minnesota, home to a significant immigrant population from Somalia.

“Biden will turn Minnesota into a refugee camp … overwhelming public resources, overcrowding schools, and inundating your hospitals,” Trump said of his Democratic opponent, former Vice President Joe Biden, during the rally. “It’s already there. It’s a disgrace what they’ve done to your state.”

The president also singled out Rep. Ilhan Omar, a Minnesota Democrat and refugee from Somalia who he has frequently targeted. He called her “crooked,” among other attacks.

Omar, who fled Somalia’s civil war when she was 8 and has been an American citizen for two decades, blasted Trump as a “white supremacist” who doesn’t understand Minnesota’s welcoming attitude toward refugees.

“This white supremacist thinks Somali refugees are worthless, this is why he cannot accept that a district that is 2/3 white can elect a Somali refugee,” she tweeted on Thursday.

Other critics also rebuked Trump for his remarks.

“Refugees – from the Holocaust to Vietnam to Somalia – made this country great. Started businesses, enriched communities, made us better,” wrote Ben Rhodes, who served as former President Barack Obama’s deputy national security adviser. “They’re much more American than this fascist lightweight.”

The State Department said the 15,000 refugee limit for fiscal year 2021 reflects new concerns about immigration amid the COVID-19 pandemic. Trump froze refugee admissions in March, citing a need to protect American jobs as fallout from the coronavirus crashed the economy.

The State Department said it anticipated processing an additional 290,000 new asylum cases, although it’s not clear how many of those asylum seekers would be granted entry.

Refugees and asylum seekers must show they have been persecuted in their home country or have a well-founded fear of persecution there on account of their race, religion, nationality, membership in a particular social group, or political opinion.

“The president’s proposal for refugee resettlement in Fiscal Year 2021 reflects the administration’s continuing commitment to prioritize the safety and well-being of Americans, especially in light of the ongoing COVID-19 pandemic,” the State Department said in its announcement.

But human rights groups and religious leaders denounced the administration’s decision, saying it will further undermine America’s tradition of welcoming immigrants and serving as a beacon of hope for those looking to build a new life here. 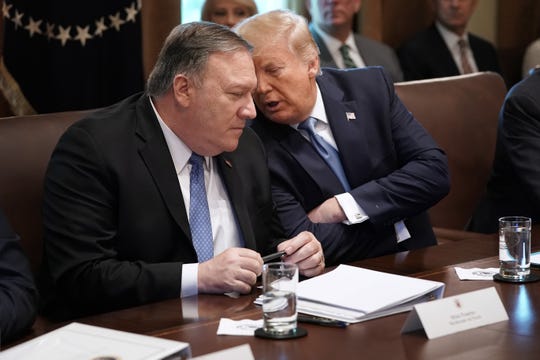 “The proposed refugee resettlement number of 15,000, a more than 80% cut over historic norms, is unacceptable,” said Rev. John L. McCullough, president and CEO of Church World Service, which helps refugees, immigrants and other displaced individuals.

“Our values as a nation and as people of faith demand that we take action when people’s lives are in danger. But for the past three years, President Trump and his administration have strayed so far from these basic principles in the name of their cruel, racist and partisan goals that the life-saving refugee resettlement program is a shadow of what it once was,” he said.

The State Department said the refugee program represents only a fraction of the Trump administration’s assistance to displaced people across the globe.

“We are working to assist refugees and other displaced people as close to their homes as possible until they can safely and voluntarily return to rebuild their lives, their communities, and their countries,” the statement said.

In Obama’s final year in office, the annual cap on refugees was 110,000; Trump has consistently pared that down over the past four years.

Before Trump took office, the U.S. led the world in accepting refugees for decades, resettling more than 3 million people since 1980, according to the Pew Research Center.

In September, Democratic lawmakers pleaded with the Trump administration to be more generous in opening America’s borders to refugees.

“Since our nation’s tragic failure to help Jewish refugees fleeing Hitler, the United States has set an example for the world by providing safe haven to the world’s most vulnerable people,” Sen. Dick Durbin, D-Ill., and several others wrote in a letter to Secretary of State Mike Pompeo. “Over the past several decades, we have safely and successfully resettled millions of refugees from across the world with strong bipartisan support.”

The lawmakers noted that the world is facing its worst refugee crisis ever, compounded by the COVID-19 pandemic. More than 79 million people were displaced across the globe in 2019, including an estimated 30 million children, according to the United Nations High Commissioner for Refugees.

The U.S.’s global standing plummets, while Americans yearn for a restoration

Some Signs of Recovery From Severe Covid Lung Damage

What Does ‘Negative’ on a Coronavirus Test Really Mean?

Amnesia: Rebirth game review: A dark fantasy game that allows players to get their hands dirty

American Samoans Stranded In US Amid Coronavirus

With Covid-19 Under Control, China’s Economy Surges Ahead

Protests Have Also Broken Out In Latin America Against Police Brutality

Here’s how it works: Just tell us how much you like or dislike these Briti…