A tropical depression remains off the East coast of the U.S., while another system could become better organized in the Caribbean.

The hurricane center predicted Nana will strengthen into a hurricane, with winds of 75 mph, before it makes landfall in Central America on Thursday.

The storm was soaking Jamaica and has prompted tropical storm watches for the northern coast of Honduras and the entire coastline of Belize.

Nana is likely to threaten parts of Central America with heavy rain, gusty winds and rough surf later this week and into this weekend. In addition to Honduras and Belize, other countries that could be affected by Nana include Guatemala and the Yucatan Peninsula of Mexico.

“The greatest threat to lives and property in Central America will be from torrential rain that can unleash flash flooding and mudslides,” AccuWeather senior meteorologist Rob Miller said.

It will not impact the United States, forecasters said. 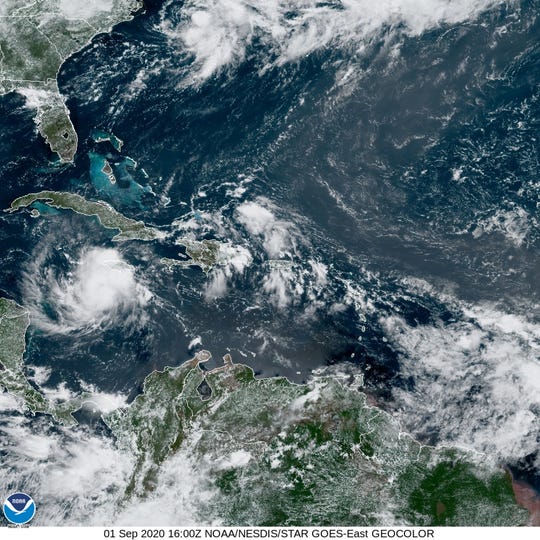 More storms coming?: We’re in for an ‘extremely active’ hurricane season: Up to 25 named storms are possible, NOAA says

Elsewhere, Tropical Depression 15 strengthened into Tropical Storm Omar as it zipped out to sea on Tuesday off the U.S. East Coast. Although the storm will not hit any land areas, “swells generated by the depression will continue to affect portions of the Outer Banks of North Carolina through this evening, causing life-threatening surf and rip current conditions,” the hurricane center said.

The storm should dissipate in the Atlantic over the next couple of days, forecasters said.

The UK Missed Out On Thousands Of Extra Coronavirus Tests

LONG BEACH, Calif. — All California State University, Long Beach, students who live on campus have been placed in quarantine

Under 10 Percent of Americans Have Covid-19 Antibodies, Study Finds

The Latest: Concerns over coronavirus upticks in California

Stalled Talks Over Covid-19 Stimulus in the U.S. Show Signs of Life

The best products to get from the site for September 2020

These Maps Show How The US Lost Control Of The Pandemic

How Should I Do Laundry Now?

While America Looks Away, Autocrats Crack Down on Digital News Sites

In the galleries: At Addison/Ripley Fine Art, studies in ?anti-landscapes? and seeing the unseen

This Strange Microbe May Mark One of Life’s Great Leaps

Want to get The Morning by email? Here’s the sign-up. Good morning. U.S. coronav…

Coronavirus live news: 1m tests to be rolled out across Africa, as WHO warns over Europe situation | World news