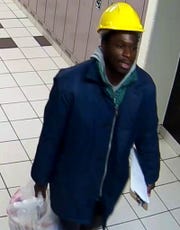 Police in Toronto released a photo of a man they believe dumped buckets of “liquefied fecal matter” on people in Toronto. (Photo: Toronto Police Service)

Police in Toronto have arrested a man suspected in a string of assaults in which buckets of “liquefied fecal matter” were dumped on people in Canada’s most populated city.

The Toronto Police Service on Tuesday arrested 23-year-old Samuel Opokuon five counts of assault with a weapon and five counts of “mischief interfere with property” following three incidents in less than a week.

“I don’t know what to say, I’m at a loss, this is absolutely disgusting,” Toronto police Const. David Hopkinson was quoted in the Toronto Star before Opoku was arrested.

The first incident occurred Friday at the John P. Robarts Library on the University of Toronto’s downtown campus. According to a statement from Toronto police, a man “assaulted a woman and a young person and threw contents from a bucket.”

CDC: People getting sick from fecal parasite in pools

The second incident was reported Sunday at Scott Library at York University in Toronto. The suspect entered the library with a bucket and, “assaulted a woman and a man, and threw contents from a bucket,” police said.

The third incident involved a woman who was walking in an area close to downtown on Monday night when a man approached and poured the contents of a bucket he was carrying on her, police said.

“He was wearing a yellow construction hat and a dark-blue jacket,” police said in a Tuesday release.

In all three cases, the contents of the bucket the suspect was carrying were described as “liquefied fecal matter,” according to police.

In the York University incident, the assailant “was wearing a black hat, blue top, light-colored pants and black gloves,” according to police.

Please consider a retweet. This man is alleged to be throwing feces on people in Toronto. If you know who he is call Toronto Police 416-808-2222 or remain anonymous by contacting Crime Stoppers 1-800-222-8477 or https://t.co/s26uSiNpM8 ^sm pic.twitter.com/AyJHBVF0P1