Netflix’s “The Haunting of Bly Manor” definitely lives up to the first half of its title with plenty of spooky goings-on. But for creator Mike Flanagan, every ghost story is also a love story.

Both a beautiful, humanistic pairing and a toxic, possessive affair factor into “Bly Manor” (streaming Friday), the anticipated – and very different – next chapter to the anthology series that began with 2018’s binge-worthy “The Haunting of Hill House.”

“When we fall in love with someone, we’re creating a ghost for ourselves later. One way or the other, the relationship will go away. And then you’re going to be left with whatever depth of love you felt for someone,” Flanagan explains. “That our truest loves are ghost stories that we’re forging for ourselves, or for them if we’re the first ones to go, was a haunting idea that seemed really ripe for exploration.” 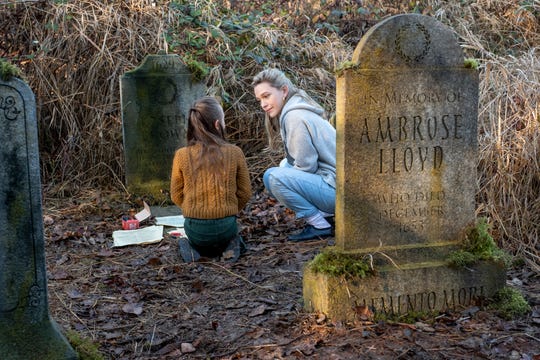 Dani moves to the family estate in the English countryside where she becomes fast friends with other folks working there, including housekeeper Hannah Grose (T’Nia Miller), chef Owen (Rahul Kohli) and groundskeeper Jamie (Amelia Eve). As she gets to know the children, who are troubled in their own ways, Dani also learns what happened to the previous nanny (Tahirah Sharif) and Wingrave’s associate Peter Quint (Oliver Jackson-Cohen), while  trying to make sense of phantom apparitions and dark figures.

When we meet Dani, she’s trying to move on her from a recent tragedy and confront a “sense of guilt, that ghost that could really keep her from just connecting with people in general,” Pedretti says.

There are similar struggles for Mrs. Grose, who moved into the manor after her husband left her to avoid gossip in a village where she’s one of the only people of color. “She seems so very well put together, but actually she’s just on the brink of falling apart,” Miller says. “That fear of rejection, her heart can’t handle that.”

Adds producer Trevor Macy: “With ‘Bly,’ it’s very hard to separate love from fear, ultimately. Fear of loss takes the form of possession in kind of a necrotic way.”

“Bly Manor” made Pedretti ponder “the great loves that we share in our life and the impact that they make on us, and how we carry that with us throughout our lives as these kinds of ghosts.” She also appreciates how the show puts an emphasis on “recognizing the fragility” of love.

So does Miller: “In that state of being fragile, do we have the capacity to really go and actually be loved and be held and learn more about ourselves?” 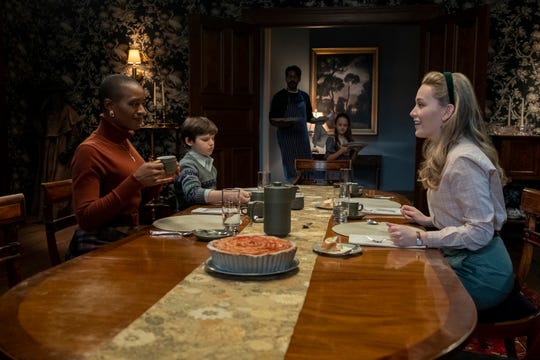 Kohli says  heartbreak makes even a horror-tinged project better. “I don’t know if necessarily getting your Prince or Princess Charming in the end is super relatable. When two people just belong together (and) everyone can see it and it doesn’t happen,  it’s frustrating; we’ve all experienced that.”

Because “Hill House” was “so mired” within the Crain family, Flanagan saw a “wonderful opportunity” with “Bly Manor” to focus on “that kind of amazing feeling that you get when you’re falling in love with someone.” But this is romance “with a capital ‘R’ the way Henry James would describe it, and had used it even in the titles of his works: It’s something dark and dangerous.”

James’ 1898 horror novella “The Turn of the Screw” is the inspiration for the opening of  “Bly Manor,” but the season also weaves in aspects of the writer’s other ghost tales, including short stories “The Jolly Corner” and “The Romance of Certain Old Clothes.” “His influence over the genre is undeniable,” says Flanagan, adding that his work guided greats like Shirley Jackson (whose novel was the basis for “Hill House”) and Stephen King. 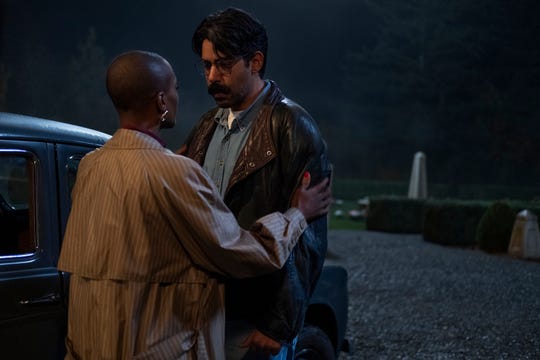 Owen (Rahul Kohli, right, with T’Nia Miller) is the estate chef who escaped to Paris to realize his culinary dreams but had to return tome to care for his mother in “The Haunting of Bly Manor.” (Photo: EIKE SCHROTER/NETFLIX)

Ghost stories like the “Haunting” anthology have always been important for one reason, Flanagan says. “We’re always spending a good amount of our time looking backwards. The ways in which the past influences the present – for all of us in our personal lives – as a society, as a country even, those things never really go away. Our losses and our regrets and our guilt and our secrets, they’re always there.”

For Miller, who believes in ghosts, “they’re a reminder that there are things out there bigger than us that we have no control over. Exploring these other realms and other spirits gives us an appreciation of the here and now.”

The ghostly appeal for Kohli, especially this year, is escapism. “You can be haunted by your own psychosis or your own trauma, which I think a lot of us are feeling right now,” he says. “It’s about overcoming those demons and finding some normality or being able to allow those things to be put to bed. People will feel a little bit more positive after watching the show.”

21 Movies Starring Actors Before They Were Super Famous

Dr. Meyers said he hoped his team would undertake such studies soon, and noted that a handful of clinical trials

New guidelines address rise in opioid use during pregnancy

Why False Positives Matter, Too

The Latest: New outbreak delays easing of rules in Melbourne

There’s Water Ice on the Moon, and in More Places Than NASA Once Thought

For Italy’s Rap Diva Myss Keta, an Era of Masks Poses a Dilemma

This Celebrity Quiz Is All About Famous Jennifers

As Someone Who Has Never Seen "Criminal Minds," I Watched The Pilot And Finale And Nothing In The Middle

What happened…to all the characters? View Entire Post › Sahred From…