Howie Mandel is not jealous of America tonight.

After witnessing “the most spectacular evening that we’ve had on Season 15” Tuesday, the comedian judge questioned how voters would narrow the competitive field from 11 to five acts on “America’s Got Talent.”

“Do you know how many favorite acts I had?” Mandel said. “I don’t know how they are going to pick five” to advance to the semifinals, which start Sept. 8.

Wednesday’s results “shocked” him. And Mandel wasn’t the only one in for a surprise.

“My husband! Where are you? I miss you so much,” Vergara exclaimed.

O’Neill joked, “How did you manage to get the dream job you’ve always wanted where you get to sit the entire time, and someone else does all the work?”

Here’s what happened during Wednesday’s episode:

Last night on ‘AGT’:Heidi Klum ‘uncomfortable’ after comedian calls her a ‘tramp’ in cringeworthy skit

‘AGT’ recap:Sofia Vergara falls in her haste to get away from shocking eye-bulging rapper 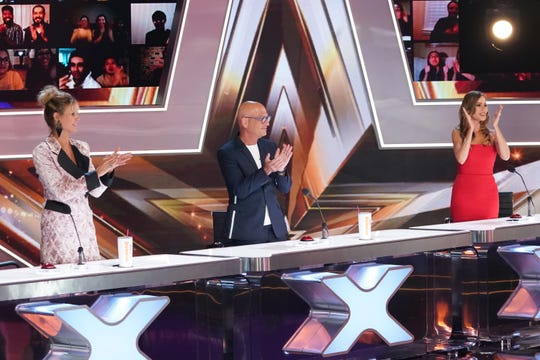 The three acts that received the most votes automatically advanced.

Acrobat Alan Silva was the first act to move forward. Silva said he was experiencing “so many mixed feelings” after moving on, before assuring voters that he “won’t let you down.”

“I’m so happy for you. You deserve this,” Vergara said. “You make it so easy, so fun to watch. You’ve gone through a lot and I hope you enjoy this.”

“I love that you started with ‘Hallelujah!’ That’s so funny,” Klum said to her Golden Buzzer winner. “I’ve heard that song so many times, but no one sang it the way you have. Hands down the best ever.”

Magician Max Major also advanced. Although we couldn’t hear his reaction, thanks to technical difficulties with his microphone, Vergara said Major was so good that he’s going to have a tough time outdoing himself in the semifinals.

WAFFLE Crew (dance group; Cowell’s Golden Buzzer winner), Malik Dope (drummer) and Nolan Neal (singer) finished in the middle of the pack and were on the brink of elimination.

“I’m in shock. I am absolutely in shock,” Mandel said after it was revealed that the three acts were in danger. I’m kind of devastated.”

The three acts went head-to-head in a live voting round for the “Dunkin’ Save,” where fans had the opportunity to rescue only one performer. Whoever received the most votes in a 30-minute flash round would move on.

Host Terry Crews called it “one of the closet votes we’ve ever had on ‘AGT’ right now.”

“It feels amazing. It feels like a weight is off our shoulders,” dance member Joel Kozik said before dedicating Tuesday’s performance to a friend the group recently lost.

But the results weren’t over just yet. The judges, who are down to three in Simon Cowell’s absence as he recovers from an electric-bike accident, had the chance to save either Dope or Neal.

Vergara opted to keep Neal, but both Klum and Mandel voted to save Dope.

“America’s Got Talent” will return Sept. 1 for the fourth and last quarterfinals round (NBC, 8 EDT/PDT), where 11 more acts will try to blow America away to advance to the semifinals.

Kids Who Grew Up Without Cable Can Name These Cartoons

The Latest: China has uptick in imported coronavirus cases

Moderna Shares the Blueprint for Its Coronavirus Vaccine Trial

Savings Gone Due To Coronavirus? We Want To Hear From You.

The Warriors Get a New Home, and New Neighbors

Who Made Your Clothes? – The New York Times

Kate Beckinsale Shut Down A Comment On Age Differences

CLOSE Executive producers of “The Ellen DeGeneres Show” are respondi…