Scientists working off the western coast of Mexico say they have discovered a new species of beaked whale.

A team of beaked whale researchers are “highly confident” that they have likely identified a new species of whale off Mexico’s western coast.

The trio of researchers — Gustavo Hinojosa, Jay Barlow and Elizabeth Henderson — working in conjunction with the Sea Shepherd Conservation Society say they detected a rare type of beaked whale first linked to an “unidentified acoustic signal” spotted by the remote San Benito Islands.

That sound may have likely been that of the Perrin’s beaked whale, a species of beaked whale that resides in deep, remote waters and is distinguished by its lack of teeth. It has never been seen before. 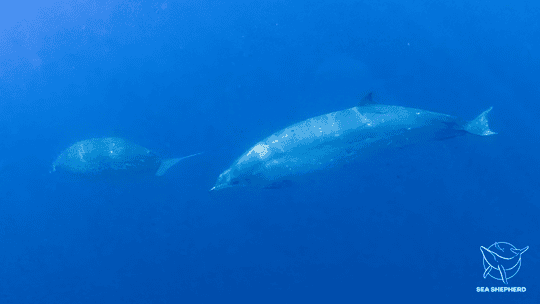 But photographs, videos and more acoustic signals later gathered by the team and Sea Shepherd workers ended up confirming the evidence of a brand new type of beaked whale.

The team told Reuters they did not confirm the possibility of a new whale until further inspecting photographic evidence taken of the whales.

According to Wildwhales.org, male beaked whales usually only have one or two teeth in their lower jaw. This particular type of beaked whale had unusual teeth placement, researcher Jay Barlow told Reuters.

Further, per a statement from the Sea Shepherd Conservation Society, the acoustic signals were not any sound “known to science.”

Only environmental genetic sampling, in which the scientists test water samples for possible DNA, can confirm the existence of a new whale.

If, indeed, it is a new type of whale, it will be only the 24th species of beaked whale ever discovered.

“We saw something new,” Barlow said in a statement. “Something that was not expected in this area, something that doesn’t match, either visually or acoustically, anything that is known to exist. It just sends chills up and down my spine when I think that we might have accomplished what most people would say was truly impossible.”

In Every Corner of Bangkok, Spirits Need a Home and Maybe a Strawberry Fanta

Coronavirus live news: 1m tests to be rolled out across Africa, as WHO warns over Europe situation | World news

The SAT is Dropping its Essay Section, Subject Matter Tests During Pandemic

Tiger Woods Announces He Had a Fifth Back Operation

The Players Are Doing It for Themselves, Not Us

São Paulo, Brazil’s most populous state, has reported a record number of deaths …

The High Price of Coronavirus Relief