The Hallmark Channel admits to being wrong, after it pulls advertising with a same-sex couple.

The Hallmark Channel is continuing its efforts to tell diversified storylines as part of its popular “Countdown to Christmas” this year.

One of the network’s holiday films features a gay couple. “The Christmas House” premiered Nov. 22 (8 EST/PST) and stars Jonathan Bennett – perhaps best known for his role in “Mean Girls” and “Cake Wars.”

In the TV movie, Brandon (Bennett) and his husband Jake (Brad Harder) visit Brandon’s parents for the holidays during which they “are anxiously awaiting a call about the adoption of their first child.”

Robert Buckley, from “One Tree Hill,” stars as Brandon’s brother Mike who also makes the trip home and reconnects with his high school love Andi (Ana Ayora). Their parents, Bill (Treat Williams) and Phylis (Sharon Lawrence), hope “that bringing the family together to recreate the Christmas house will help them find resolution and make a memorable holiday for the entire family and community,” the description reads. 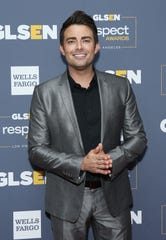 Jonathan Bennett, at the GLSEN Respect Awards in Beverly Hills, Calif. on Oct. 25, 2019, will star in a Hallmark “Countdown to Christmas” movie this year. (Photo: MICHAEL TRAN/AFP via Getty Images)

“Our holiday table is bigger and more welcoming than ever,” Michelle Vicary, executive vice president, programming said in Crown Media Family Networks’ announcement. “Our movies are rooted in warmth and positivity, meaningful connections, family gatherings, and seasonal traditions – a winning formula we hope will bring our millions of viewers much-needed levity and holiday cheer at the end of a tough year.”

The news from Hallmark follows Lifetime’s August announcement that, for the first time, its lineup would include films centered on LGBTQ romance and a Chinese American family.

“Diversity and inclusion is a top priority for us and we look forward to making some exciting programming announcements in the coming months, including announcements about projects featuring LGBTQ storylines, characters, and actors,” the Hallmark Channel said in a statement to People and Entertainment Tonight. “We are committed to creating a Hallmark experience where everyone feels welcome.”

In December, the Hallmark Channel faced backlash after it pulled ads for the wedding website Zola that featured same-sex couples. The network reversed its decision after the hashtag #BoycottHallmarkChannel began trending on Twitter and celebrities, including Ellen DeGeneres and William Shatner, critiqued the decision.

“The Crown Media team has been agonizing over this decision as we’ve seen the hurt it has unintentionally caused,” read a statement issued at the time by Hallmark Cards CEO Mike Perry. “Said simply, they believe this was the wrong decision. … We are truly sorry for the hurt and disappointment this has caused.”

‘Grool!’: The ‘Mean Girls’ cast reunites in a video to commemorate October 3

Can You Score At Least 11/13 On This "American Horror Story" Quiz?

Ovechkin and Three Other Capitals Out After Health and Safety Violation

12 Celebrity #TBT Photos That Were Shared With Us This Week