The Biden administration on Wednesday paused or put under review a wide swath of Trump-era foreign policies as America’s new top diplomat took the helm of the State Department including Iran and arms sales in the Middle East. (Jan. 27)

WASHINGTON – Iran’s highest-ranking diplomat in the United States warned the Biden administration it “must act quickly” to return to the 2015 nuclear deal abandoned by former President Donald Trump “because the window is closing” on Tehran’s deadline for Washington to lift economic sanctions. Majid Takht-Ravanchi, Iran’s ambassador to the United Nations, made the comments in exclusive remarks to USA TODAY.

Iran’s hardline-dominated parliament has set a Feb. 21 deadline for Biden to lift U.S. sanctions as part of a move back into thenow-breached agreement known as the Joint Comprehensive Plan of Action, or JCPOA. If the U.S. fails to act, Iran says, it will halt inspections of its nuclear sites by the International Atomic Energy Agency – a key provision of the accord – and further boost uranium enrichment.

This would effectively bring Iran one step closer to the 90% enrichment level required for a nuclear weapon. Iran has been enriching at around 20%, also a violation of the accord, as part of its response to the U.S. exit from the deal. 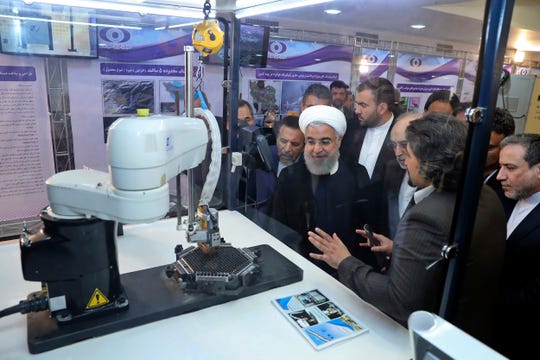 In this April 9, 2018, Iran’s President Hassan Rouhani listens to explanations on new nuclear achievements at a ceremony to mark ‘National Nuclear Day,’ in Iran. (Photo: AP)

“The party that needs to change course is the United Sates, and not Iran,” said Ravanchi, who helped negotiate the agreement that Trump withdrew the U.S. from in 2018.

Biden’s new Secretary of State Antony Blinken said Wednesday, his first full day as the U.S.’s top diplomat, that Washington will only return to the deal once it is satisfied that Iran has come back into full compliance with the agreement. This means, in part, limiting uranium enrichment to just under 4%.

Washington accuses Iran of escalating tensions through provocative acts such as seizing cargo ships in the Persian Gulf (a vital route for oil supplies), backing Iranian proxies who have repeatedly launched rockets at the U.S. embassy in Iraq, and imprisoning Iranian-Americans on false spying charges.

Antony Blinken testifies during his confirmation hearing to become secretary of state before the Senate Foreign Relations Committee in Washington on Jan. 19. (Photo: Pool photo by Alex Edelman)

Blinken said the U.S. was a “long ways” from meeting Biden’s aspiration to rejoin the deal.

“Iran is out of compliance on a number of fronts, and it would take some time, should it make a decision to do so, for it to come back into compliance, and for us then to assess whether it was meeting its obligations. So, we’re not there yet, to say the least,” Blinken told reporters at a press briefing.

Iran counters that Washington, not Tehran, is behind escalating tensions. It points to the Pentagon’s killing of Iran’s top commander Gen. Qasem Soleimani in a U.S. airstrike in Baghdad in January last year, and the assassination of Mohsen Fakhrizadeh, its top nuclear scientist, outside Tehran in November. Iran’s government accuses Israel, with U.S. support, of being behind Fakhrizadeh’s killing.

Iran also insists, despite skepticism from the international community, that it is not interested in developing a nuclear weapon and that its nuclear activities are intended for civilian purposes only.

Nassar Hadian, a professor of international relations at the University of Tehran who has close links with officials in Iran’s foreign ministry, predicted that both the U.S. and Iran would ultimately return to the nuclear deal as it existed under the Obama administration.

“Washington may not be happy about it, but it knows it’s the only game in town,” he said.

Biden risks political blowback if he returns to the deal without gaining any new concessions from Iran.

Republicans in Congress, as well as some key Democrats, are pressing Biden to make the most of Trump’s “maximum pressure” campaign on Iran. Under that policy, the Trump administration slapped hundreds of sanctions on Iran. Lawmakers say he should use that leverage to force Iran to curb its other malign activities, including its ballistic missile program and its support for terrorist proxy groups.

“I fear returning to the JCPOA without concrete efforts to address Iran’s other dangerous and destabilizing activity would be insufficient,” Sen. Bob Menendez, D-N.J., the incoming chairman of the Senate Foreign Relations Committee, told Blinken at his Jan. 19 confirmation hearing.

Menendez said there is bipartisan support for a “comprehensive diplomatic approach” that would limit Iran’s other antagonistic activities.

Republicans have been far more vocal in their campaign to dissuade Biden from rejoining the deal.

“Unfortunately, the Iranian regime thinks it has successfully waited out the maximum pressure program that we have in place,” said Sen. James Risch, the top Republican on the foreign relations committee.

Following Iran’s shootdown of an American drone, tensions are high. But this is nothing new for the U.S. and Iran. We have the FAQs.

Ali Vaez, an expert on Iran with the Crisis Group, a nonpartisan organization that seeks to prevent conflict, said Iran’s Feb. 21 deadline “has now basically thrown a ticking time bomb into this process.”

If there’s no progress by that date, he said, “I’m afraid … that significant nuclear escalation is on the horizon.”

He said the Biden administration faces a difficult calculation: alienate key members of Congress and ignite a domestic firestorm, or “prevent Iran’s nuclear program from crossing the Rubicon towards weaponization.”

Despite the obstacles, Vaez says there is “political will on both sides” to revive the JCPOA.

Biden could issue an executive order revoking Trump’s withdrawal from the deal, he said. At the same time, Iranian leaders could issue a similar decree declaring their intention to come back into compliance. The two sides could then craft a roadmap that would spell out “staggered but coordinated and simultaneous steps for coming back to full compliance with the deal,” Vaez said.

Vaez also said Iran could be open to a broader deal once the U.S. rejoins the JCPOA, despite Tehran’s rhetoric to the contrary.

Seyed Mohammad Marandi, an American-born Iranian political analyst at the University of Tehran, said the February deadline was intended to signal to the Biden administration that Iran is aware that much of  the Trump administration’s actions  were done by decree.

“This is about testing his sincerity,” he said. “Just as Biden has been busy reversing many of Trump’s executive orders he could easily do this with the Iranian nuclear deal. There’s nothing particularly complicated about this. It has nothing to do with Congress. Biden’s hands are by no means tied. He can do it with one signature.”

Marandi said “Iran didn’t appease Trump for four years and it’s not going to appease Biden,” who Tehran views to be in a weakened position domestically because of social divisions in the U.S. and an economic crisis caused by the raging coronavirus pandemic.

U.S. sanctions on Iran target many of the key drivers of its economy, such as the oil industry. These measures have also impeded Iran’s access to personal protective equipment, vaccines and health services during the coronavirus outbreak. Iran’s outbreak is the worst in the Middle East. The Trump administration believed that by withdrawing from the nuclear accord and reimposing sanctions Iran would eventually come crawling back to the U.S. That, so far, hasn’t happened.

December 28, 2019 Comments Off on Spain pulled into diplomatic spat between Bolivia, Mexico

December 17, 2019 Comments Off on North Korea claims another ‘crucial test’ at its rocket launch site

The Lebanon Explosions in Photos

August 5, 2020 Comments Off on The Lebanon Explosions in Photos

Neanderthals Could Swim. They Even Dived.

January 15, 2020 Comments Off on Neanderthals Could Swim. They Even Dived.

Pain in the Oil Patch

Homes for Sale in New Jersey and Connecticut

February 9, 2020 Comments Off on Homes for Sale in New Jersey and Connecticut

[ad_1] Dear unknown friends—if I may call you that: My beloved Mrs. T (that’s he…

Europe is imposing new restrictions, as US surge goes unchecked