Hilary Swank has always wanted to be among the stars. But we’re not talking Brad or Leo.

“I wanted to be an astronaut before I wanted to be an actor, which was about the age of 9,” Swank says. “It still has the same feeling for me now as it did then, the whole idea of something bigger than us and the unknown. I still would love to go to space someday, but being an actor and playing an astronaut is second best.”

What to watch: 50 best TV shows on Netflix: ‘Legend of Korra,’ ‘The Office,’ more 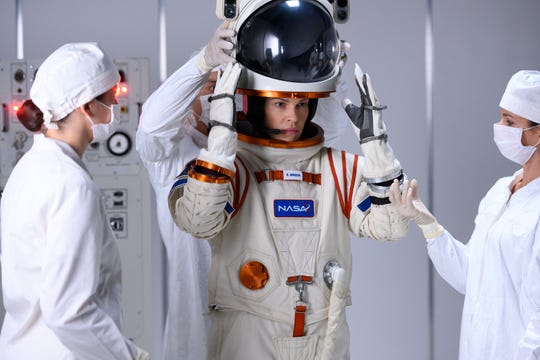 Emma Green (Hilary Swank) suits up for a mission to Mars in this exclusive first look from Netflix’s “Away.” (Photo: DIYAH PERA/NETFLIX)

Set in the near future, the 10-episode first season dramatizes the first human-led expedition to Mars, commanded by pragmatic American astronaut Emma Green (Swank). Emma leads an international crew of scientists and astronauts, whose backstories and families we come to know over the course of the season. Members of the team initially question Emma’s leadership abilities, while she wrestles with distance from and guilt over leaving her teenage daughter (Talitha Bateman) and husband (Josh Charles) back on Earth.

The series is loosely based on a 2014 Esquire story by Chris Jones, about the first American astronaut to spend a year in space.

“I don’t consider myself a space show guy, but there was something about this article that really gripped me,” Katims says. “It was a different way of thinking about space: this very intimate look at what the human experience was like to be away for so long, how to stay connected to the world, and what it does to your mind and body. That seemed so different.”

Shortly after launch, Emma’s husband, Matt, suffers a stroke caused by a rare vascular disease known as cerebral cavernous malformation. Emma considers leaving the mission to help with Matt’s recovery, but he and their daughter, Alexis, insist she press on. That story line especially resonated with Andrew Hinderaker, who created the show with Katims and executive producer Jessica Goldberg.

“There’s a moment in the article that talks about an astronaut being up in the International Space Station when something really catastrophic happens to his family, and what that is to be so far away,” Hinderaker says. “I’ve been in a long-distance relationship with a woman who was diagnosed with a progressive disease just shortly before Jason had brought me the article, so that moment of finding out that someone you love is in trouble and needs you and you’re away (working) was something that resonated really deeply.” 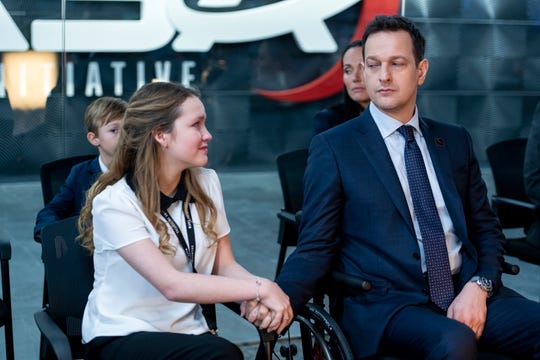 Charles, who’s best known for CBS’ “The Good Wife,” says he found the show’s combination of cosmic and interpersonal drama “intriguing. (Director) Ed Zwick said that every marriage is like a mission to Mars. And while funny, it also really stuck with me. The potential of exploring this couple and this family during this trying time seemed rich.”

To prepare for the role, Swank, 46, spoke extensively to former astronaut Mike Massimino and attended a so-called “boot camp,” where she learned wire work for the series’ zero gravity space scenes.

“We were on these wires all the time trying to learn to move gracefully, which is something I don’t do. I’m kind of lumbering,” Swank says. In addition to the stunts, “the most challenging thing was doing a monologue that’s emotional while other people are floating by. You get kicked in the face and you just start laughing.” 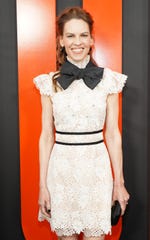 For Swank and the creators, the show’s emphasis on science and teamwork couldn’t come at a more apt time, as many of us continue to isolate at home with family or others due to COVID-19. One particularly prescient episode finds Ram (Ray Panthaki), an astronaut from India, falling gravely ill with a virus. He is quarantined from the rest of the crew, who wear protective gear and attempt to treat him from a safe distance.

“If someone had said this (pandemic) would be happening right when we wrapped filming (last winter), I wouldn’t have been able to believe it,” Swank says. “There’s probably nothing more isolating than going to space for three years, but I think people (now) are going to relate to that more and understand it a little deeper. This pandemic has put into perspective what’s important in life, which is our health and really being able to be with loved ones.”

[ad_1] We all know Edward, but do you remember what Garrett looks like? Image: V…