Cancer is the leading cause of death by disease for children past the age of infancy in the U.S. It devastates too many families, but there is hope.

“We’re heartbroken to have to announce our beautiful daughter Francesca passed away last night in the arms of her mom and dad,” wrote Kaczynski, sharing photo of their baby girl. “There will always be a Bean-sized hole in our hearts for her. We’re so grateful to have known her love. Francesca we love you.”

In September, Kaczynski said the baby was diagnosed “with an extremely rare and very aggressive rhabdoid brain tumor.”

We’re heartbroken to have to announce our beautiful daughter Francesca passed away last night in the arms of her mom and dad. There will always be a Bean-sized hole in our hearts for her. We’re so grateful to have known her love.

Francesca we love you. https://t.co/OGml2nZ12H

In a short obituary posted Friday, the couple wrote they often called the baby, born March 11, “Bean, Beanie or Beans.”

“In her short life, Francesca was an outgoing, bold and curious baby,” reads the obituary. “She had huge, deep brown eyes that followed whatever her parents were doing.”

“Her many smiles sent a thrill through the world. She was so generous with them, even when most of the smiles back were covered by masks and even when she faced challenges that would scare an adult, like a cancer diagnosis or being born with hearing loss.” 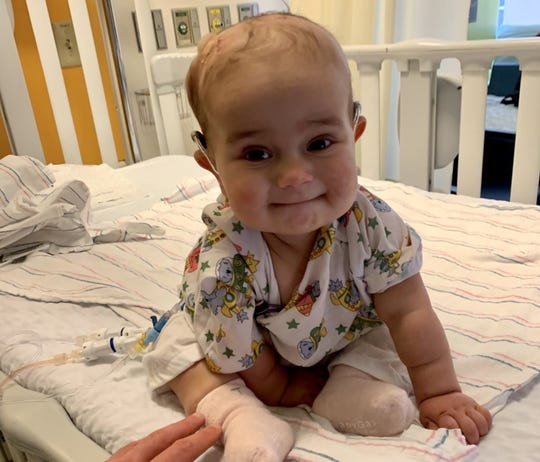 In September, the CNN reporter had cheered on her progress, saying “Francesca is the strongest person and most resilient person. Less than a week ago she had two brain surgeries and she’s already at home and smiling. I’m confident she will fight this.”

But on Dec. 23, the CNN reporter revealed his daughter, who had undergone chemotherapy, was on life support after developing a “terrible fungal infection” and being on a ventilator for over two weeks. The couple prayed for a “Christmas miracle for our family” on Thursday.

“One of the hardest parts of watching Francesca on life support has just been the limbo of everything,” Kaczynski tweeted Wednesday. “When she’s not getting worse, but not getting better. Just the day in and out of waiting becomes so hard. I hope everyday for that sign she’s getting better and can improve.”

“Heartbreakingly beautiful obituary. I am so sorry. God Bless you and Rachel,” tweeted Valerie Bertinelli.

“Oh no. Andrew i am so deeply sorry,” wrote Mia Farrow.

“All my sympathies, while knowing that all the world’s sympathy is wholly inadequate for such a loss,” wrote New York Times columnist Nicholas Kristoff.

“We are so terribly sorry, Andrew, and we are #TeamBeans forever,” said “Today” show host Willie Geist.

“Andrew – I can only imagine what you and Rachel are feeling today. Francesca’s love will be with you always and — with time — you will heal. Praying for you and your family,” wrote Megyn Kelly.

The couple asked that lieu of flowers, people to donate in honor of Francesca to Team Beans in the PMC Winter Cycle, a charity event which donates directly to Dana-Farber Cancer Institute.

September 14, 2020 Comments Off on Organizers Khloe Kardashian jokes she ‘should marry’

18 Movies Every Millennial Can Quote From Start To Finish

August 11, 2019 Adam Jacob Comments Off on 18 Movies Every Millennial Can Quote From Start To Finish

6 Podcasts to Feed Your Inner Gourmand

December 28, 2019 Comments Off on 6 Podcasts to Feed Your Inner Gourmand

Check Is in the Mail? For Many Bill Payers, It Won’t Be

The Week in Business: The Vaccine Boost

November 15, 2020 Comments Off on The Week in Business: The Vaccine Boost