Former President Donald Trump isn’t the only one dealing with loss after Election Day.

Fox News, the longtime top-ranked cable news network and, until recently, Trump’s favorite media outlet, has lost its No. 1 status, too, with CNN now holding the top spot.

From Election Day (Nov. 3) through Inauguration Day (Jan. 20), when Democrat Joe Biden was sworn in to succeed Trump as president, CNN was the most-watched cable news network in both total viewers (1.8 million) and those 25-to-54 (501,000), the key news demographic, according to Nielsen ratings.

CNN also took over the top spot among viewers in the key demographic in prime time, where Fox features its biggest hitters – opinion hosts Tucker Carlson, Sean Hannity and Laura Ingraham – although Fox remains No. 1 overall.

The reversal of fortune was most apparent on Inauguration Day, where CNN was No. 1 among news competitors from 11 a.m. to 4 p.m. EST with 7.7 million viewers, and Fox finished last among news networks with 2.2 million. (When Trump was inaugurated in 2017, Fox topped the rankings with 8.8 million, while CNN straggled in at No. 5 (2.6 million), ahead of only MSNBC.

Right-wing Newsmax, which drew Trump’s praise as he criticized Fox for being disloyal, enjoyed a huge post-election bump in its tiny viewing base (47,000 in October, 214,000 in November and 225,000 in December).

Trump, who tweeted support of Newsmax and One America News Network (OAN), had been “disparaging Fox News for a while,” he says. Fox was “on air admitting the election was settled and that Joe Biden won. That seems to have had an impact on its viewer base, because that’s when we start to see this trend happen and the Newsmax audience bump up.” 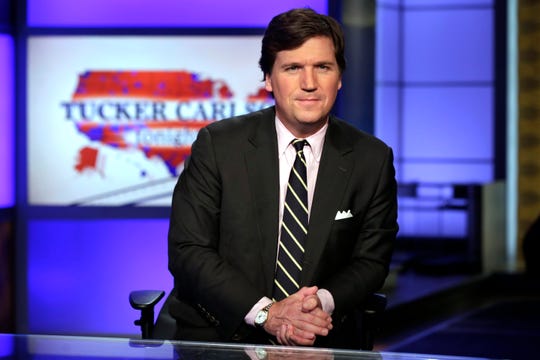 Fox News Channel’s primetime opinion programming, which includes “Tucker Carlson Tonight,” has performed better than its daytime news programming during the network’s slide from the No. 1 viewer ranking after the November election. (Photo: Richard Drew/AP)

Fox, whose audience includes many Trump supporters, likely took a ratings hit because of the former president’s loss, says Jeffrey McCall, a professor of communications at DePauw University in Indiana.

“As Trump departed, I’m sure a lot of his followers were disgruntled or disappointed, in some ways even exhausted. That would explain some of the audience drift away from Fox,” he says. “I think some disgruntled voters did go over to at least sample what was going on at Newsmax and OAN,”  which is unmeasured by Nielsen. “I’d be surprised if that audience (stays there) long term, because I think Fox viewers are relatively loyal and have watched them over a good many years.”

Opinion programming performs best for Fox, so it’s no surprise the network added a fourth hour at 7 p.m. EST, currently with a rotating group of hosts, and moved Martha MacCallum’s news-based show to the less desirable 3 p.m. slot.  “Fox has recognized that opinion needs to drive their evening broadcast,” McCall says.

In the post-election period, both CNN and MSNBC were up dramatically from a year earlier, partly due to the election news and the coronavirus pandemic, but Fox was down by a small amount across the day. 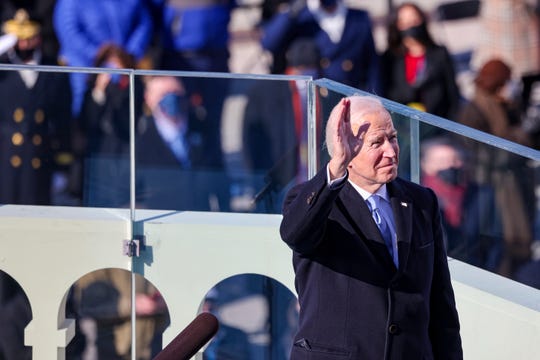 CNN and MSNBC enjoyed big audience bumps leading up to the inauguration of President Joe Biden, but it remains to be seen whether they can sustain those gains over time. (Photo: Tasos Katopodis/AP)

It’s hard to say whether the ratings shake-up will be long-lasting, Hughes says, pointing to a bump in overall viewership surrounding the 2016 election.Newsmax dropped to an average of 153,000 in the first week in January, compared to December’s 225,000.

“We definitely saw a halo effect from the 2016 election, too. That eventually died down. We need more time to see if it’s just a temporary blip or if there’s been a lasting halo effect,” he says.

McCall thinks the shift is likely to be temporary, noting that CNN, MSNBC and broadcasters’ news divisions are competing for many of the same viewers while Fox has more of the right-leaning audience to itself. 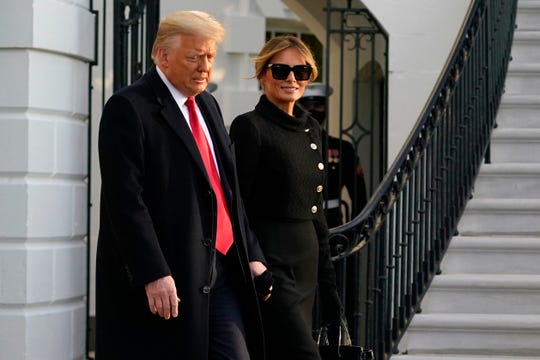 President Donald Trump, seen here with first lady Melania Trump leaving the White House for the last time, could influence cable-news ratings depending on how much he tries to remain in the media spotlight. (Photo: Alex Brandon, AP)

“That’s not to say Fox will be No. 1 and dominant all the time, but I think they will be a key competitor, and I would not be surprised if they’re not No. 1 in a month or so,” he says.

One major variable is Trump, a news magnet who provided a ratings bump for all media, regardless of political slant.

“One key will be whether CNN and MSNBC can generate enough excitement to keep their audiences engaged without Trump always being the center of the news agenda,” McCall says. “If (Trump) stays off the news and it’s just covering Biden, it’ll be interesting to see if they can maintain that audience growth. I expect some sort of natural decline once the sugar high of the inauguration has drifted off.”

Who is the moderator for the final presidential debate? Kristen Welker

October 22, 2020 Comments Off on Who is the moderator for the final presidential debate? Kristen Welker

Best TV shows of the decade

December 12, 2019 Comments Off on Best TV shows of the decade

Lana Condor On Mental Health And To All The Boys

February 3, 2021 Comments Off on Lana Condor On Mental Health And To All The Boys

The Coronavirus Is Plotting a Comeback. Here’s Our Chance to Stop It for Good.

February 26, 2021 Comments Off on The Coronavirus Is Plotting a Comeback. Here’s Our Chance to Stop It for Good.

Across the United States, and the world, the coronavirus seems to be loosening its stranglehold. The deadly curve of cases,

February 25, 2021 Comments Off on A New Coronavirus Variant Is Spreading in New York, Researchers Report
Health

For Some Teens, It’s Been a Year of Anxiety and Trips to the E.R.

AT&T, loaded with debt from its DirecTV deal, sells part of its TV business to a private equity firm.

A Better Way to Zap Our Brains

Wyckoff, N.J.: A Peaceful Suburb With a Sense of Community

January 10, 2020 Comments Off on Wyckoff, N.J.: A Peaceful Suburb With a Sense of Community

I was paid to speak against abortion by pro-lifers

May 21, 2020 Comments Off on I was paid to speak against abortion by pro-lifers

July 18, 2020 Comments Off on 5 Ways the Coronavirus Has Changed Suburban Real Estate

Most Disturbing Scenes In Horror Movies Ever

We recently asked members of our BuzzFeed Community, “What is the single m…