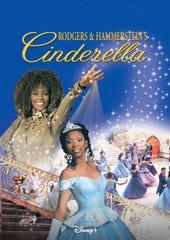 The best version of “Cinderella” isn’t Disney’s animated film, or the recent live-action remake. It’s not a Broadway production, either. It’s the 1997 version of “Rodgers & Hammerstein’s Cinderella” starring Brandy Norwood and Whitney Houston.

The film has been absent from the streaming landscape for years, but Disney+ is rectifying that mistake by adding the musical on Feb. 12.

The TV movie, which first aired on ABC in November 1997, and averaged a huge 60 million viewers, was the third version of the Broadway classic on TV, after two wildly successful versions starring Julie Andrews (1957) and Lesley Ann Warren (1967). But this starred Brandy as the title princess, Houston (also a producer) as the fairy godmother, Whoopi Goldberg as the Queen and Filipino-American actor Paolo Montalban as Prince Charming, making it a pioneer in diverse casting, a touchstone for the millennial generation and a sublime version of the fairytale.

The cheeky script expanded and poked loving fun at the age-old story, just by having Houston play a character usually imagined as an old woman. Unlike in the recent slate of live (or not-so-live) TV musicals, the casting enhanced, rather than detracted, from the musical quality of the production.

The Rodgers and Hammerstein score was elevated by Houston’s vivacious voice, and her song “Impossible” remains one of the film’s most enduring hits. The rest of the cast, including Broadway legend Bernadette Peters as the evil stepmother, contributed to a gorgeously sung soundtrack, as good as any original Broadway cast recording.

The film is remembered primarily for its colorblind casting, featuring a Black woman as its princess, an important moment of representation for young kids of color watching at home. More than 23 years later, it’s still a rarity for a Disney princess or lead character to be non-white.

Amid the tragedy of the COVID-19 pandemic, which has shuttered most live musical performances, “Cinderella” is extremely welcome. Stuck at home in our own little corners like Cinderella, it’s the perfect time for a new generation of kids to be introduced to its “possible” world.

Have toxic workplace claims lost her fans for good?

August 24, 2020 Comments Off on Have toxic workplace claims lost her fans for good?

February 14, 2020 Comments Off on Tell Us Some Of Your Preferences And We’ll Reveal Which Marvel Actor Would Be Your Valentine

June 26, 2020 Comments Off on Plan A '90s Wedding And We'll Reveal Which "Friends" Character Is Your Soulmate

What Are Your Unpopular “Hunger Games” Opinions?

January 22, 2020 Comments Off on What Are Your Unpopular “Hunger Games” Opinions?

This Week, Clean Your Stove

August 5, 2020 Comments Off on This Week, Clean Your Stove

February 18, 2021 Comments Off on Riverdale Betty And Archie Hookup

Is it too soon for TV shows about COVID? Yes it is.